Several of us went out to experience Saturday night in the big city last night, so it is agreed in advance that we’ll get a slightly later start today – at 10am instead of 9am. Our destination is the Vila Madalena neighborhood which has a huge concentration of graffiti art on several of its streets. The area is called Beco do Batman — Batman’s Alley.

The nickname for the area is attributed to a graffito of the DC Comics character Batman which was painted on one of the walls in the 1980s. Local art students began filling the walls with other psychedelic and cubist influenced designs. The graffiti of Beco do Batman is now continually renovated and cared for by local community members.

So get this – something happened today that has never happened before on a Toto Tour! Two of the tour members start chatting about people they know in Taos, New Mexico – which happens to be where both of them hail from but don’t live there now. Gabriel and Abraham discover that they have a common first cousin, and are therefore closely related and had no idea about this until the third day of the tour!!! What are the odds that these two would show up on the same Toto Tour and put the pieces together? You just can’t even begin to calculate it! I hope it is the beginning of a long friendship!

After a hot beverage and some pre-lunch sweets, we visit the Monument to the Bandeiras (the people who settled the interior of Brazil). The direction of movement of the statues is directly facing the interior of the country.

Directly across from this massive monument is Ibirapuera Park. Ibirapuera Park was the first metropolitan park in São Paulo,  designed along the lines of other great English landscape gardens built in the 20th century in major cities around the globe. It was inaugurated on 21 August 1954 for the 400th anniversary of the city of São Paulo, with buildings designed by architect Oscar Niemeyer.

We conclude today’s tour enjoying lunch at Figueira Rubaiyat – a restaurant built around a one-hundred-year-old fig tree. The food is delicious, but not cheap!

Tomorrow we head off to the Pantanal, and hopefully warmer weather! 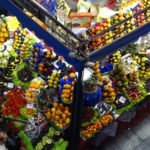 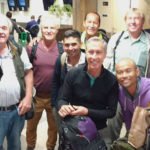