“Sumakha” is a Sanskrit word that is both adjective (meaning “very joyous or gay”) and noun (meaning “a joyous festival”). It has been said that visiting India is like experiencing an ongoing festival. It can be an assault to the senses, with its multitudinous hoards of people, the vibrant colors of thousands of saris and turbans in a public market, and the spectacle of elaborate monuments from bygone eras. As large as Europe, India is where East meets West, and North meets South. It has one of the world’s oldest cultures, with a long history that is forever alive. Around every corner another wonder of India’s kaleidoscopic richness reveals itself—Hindu temples, Buddhist stupas, Mauryan pillars, Mughal forts, British colonial architecture. Experience the world-famous marvels of Rajasthan during this comprehensive tour, including the Taj Mahal, the Agra Fort, the Amber Fort, and many exotic shrines, temples and palaces. There are 9 UNESCO World Heritage Sites on this tour, which has been timed to take advantage of three different cultural festivals. Any visit to India is destined to be a life-changing experience. 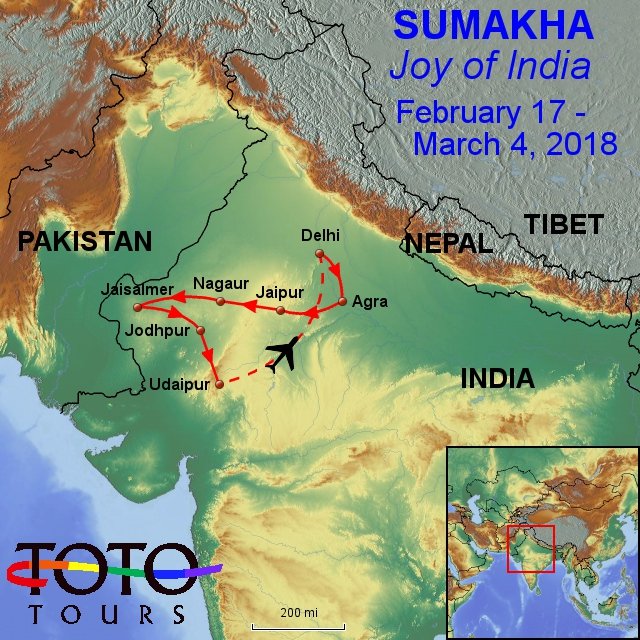 Delhi is the capital, and third largest city of India. Delhi is actually twin cities comprised of Old Delhi and New Delhi. Old Delhi was the capital of India during Muslim rule from the 12th to the 19th century. New Delhi was established in 1911 by King George V who, feeling Calcutta was too remote, wanted a new capital for the Indian Empire. Delhi is a kaleidoscope that promises everything for a visitor–historic sites, heritage, tourism, museums, gardens, galleries, and more. Plan to arrive in Delhi for any time this afternoon or evening. Touring does not commence until tomorrow, but your hotel room will be available for your arrival any time after 3pm today. You will be personally greeted at the International Airport upon arrival, presented with a fresh flower garland, and transferred to our hotel. (Meals Aloft) 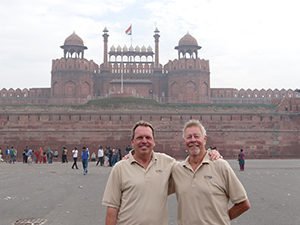 After breakfast, enjoy a full-day guided tour of Delhi, both the old and new quarters. In Old Delhi, see the 17th century walled city of Shah Jahanabad, and visit the great Jama Masjid, the principal mosque of Old Delhi. Later take a rickshaw ride through Chandi Chowk, the old marketplace and now a picturesque bazaar. Our rickshaw drops us at the entrance to the Red Fort, one of the many magnificent forts we will encounter on our journey. In New Delhi visit Raj Ghat, the memorial to the Father of the Nation, Mahatma Gandhi. We drive past India Gate, the massive memorial to commemorate Indian soldiers, and see the President’s House, official residence of the President of India, previously known as the Viceroy’s House. Finally we also visit Qutub Minar, the tallest brick minaret in the world and an important example of Indo-Islamic Architecture. This evening we will have a Welcome Dinner at our hotel. Overnight in Delhi. (All Meals) 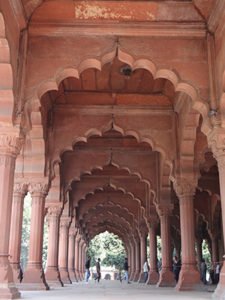 After breakfast we depart Delhi and drive to Agra, for centuries the center of art, culture, commerce and learning in India. Upon arrival, we check in to our hotel, with time to freshen up before sightseeing. Our first stop is Itmad-ud-Daula, one of the most beautiful of Mughal tombs. We visit a center for the exquisite art of setting semiprecious stones in marble, known as “parchin kari,” first introduced in India in the 17th century. At sunset we visit the world-famous Taj Mahal, a jewel of Muslim art and one of the finest examples of Mughal architecture, harmoniously combining elements from Islamic, Persian, Ottoman Turkish and Indian architectural styles. Dinner at Pinch of Spice Restaurant. (Breakfast / Dinner) 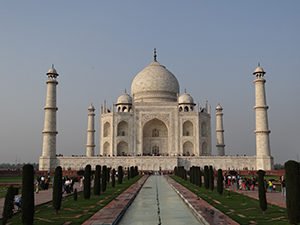 After breakfast visit Agra Fort, situated around the bend of the Yamuna River from the Taj Mahal. Built principally as a military establishment in 1565, the massive red sandstone fort measures more than 1.5 miles long. Afterwards, we drive to Fatehpur Sikri, one of the world’s most perfect ghost cities. Built during the second half of the 16th century, Fatehpur Sikri (the City of Victory) was the capital of the Mughal Empire for only 10 years before a drought made it impossible to stay. After lunch, we transfer by road to Jaipur, where we check into the hotel upon arrival. This evening attend a “puja” (Sanskrit meaning reverence or homage) at Ganesh Temple, one of the oldest in Jaipur. The temple is located outside the main city walls, inside an exotic palace on a small hill still owned by the Maharaja’s family. (All Meals) 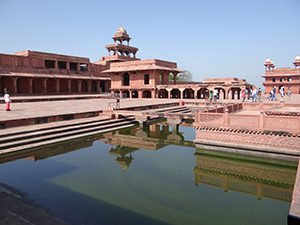 After breakfast we make a triumphal entry into the Amber Fort on an elephant. The Amber Fort is a romantic Rajasthani Fort Palace, with a rustic exterior and a lavish interior. Miniatures painted on the walls depict hunting and war scenes as well as festivals. Precious stones and mirrors are embedded into the plaster. Inside the Fort visit the Jag Mandir or the Hall of Victory. Later we tour the city of Jaipur, visiting the Maharaja’s City Palace, which has been converted in part into a museum housing an impressive array of ancient weaponry, textiles, and costumes. Continue the city tour, visiting the Jantar Mantar, which is the largest stone and marble crafted observatory in the world, built from 1728 to 1734. We finish our tour with a walk through the busy lanes of the city past Hawa Mahal (Palace of Winds). (Breakfast / Dinner) 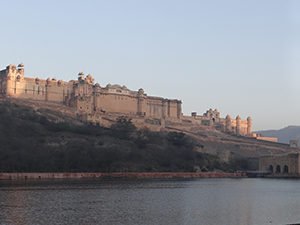 Drive to Nagaur, a quaint Rajput town located in northeastern part of Rajasthan. On arrival, we check-in at our Camp, have lunch and then attend the Naguar Cattle Fair, the second largest in the nation boasting the trading of 70,000 animals each year. The owners, displaying their colorful turban and long moustaches, sell cows, bullocks, oxen, horses and camels festooned with colorful accessories. Besides observing the locals doing business, visitors enjoy sports competitions, camel races, jugglers, puppeteers, storytellers and campfire evenings. We shall enjoy the stillness of the desert sand amid the enchanting ambience created by the folk music of Jodhpur. (All Meals) 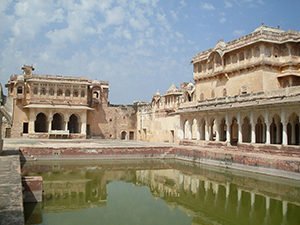 Since we arrived in Nagaur mid-day yesterday, there wasn’t enough time to fully appreciate this annual gathering. There is so much to see and do that today is reserved for a full day at the Cattle Fair. If you missed something yesterday, you can see it today or return to an event or activity that compelled you to return for a second look. This is an immersive and authentic slice-of-life (and once-in-a-lifetime) experience. Overnight again at our Camp. (All Meals) 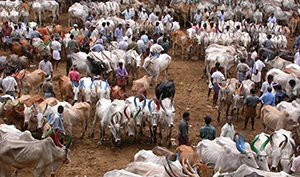 Today proceed to Jaisalmer, driving through the desert village of Khichan Village well-known for migratory bird ”Kurja” (crane). We will have lunch in the small town of Phalodi and then continue toward drive Jaisalmer, a fairy-tale town in the Thar Desert founded about 800 years ago. This desert fortress is one of Rajasthan’s most exotic and unusual towns, the buildings exquisitely carved from golden-yellow sandstone in the 19th century. The old fort, built in the 12th century, stands on the high Trikuta hill, with beautifully carved Jain temples. Jaisalmer is also famous for its embroidery, Rajasthani mirror work, rugs, blankets, antique, and stonework. (All Meals) 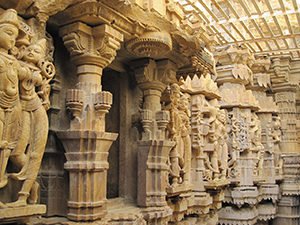 The fort is the liveliest in India, with homes and shops tucked in hidden lanes swaddled in colorful Rajasthani cloths. About a quarter of the Old City’s population resides within the fort walls. Within the fort walls are a beautiful set of Jain temples built between the 12th and 15th centuries. Our guided walk about the city takes us to several havelis (mansions) built by wealthy merchants. They are still occupied by families, descendants of the original owners in most cases. After lunch we have free time to explore the winding narrow passages of the walled old city. In late afternoon we visit Khuri village, with houses of mud and straw decorated like the patterns on Persian carpets. Finally take a camel ride in the sand dunes just before sunset. (All Meals) 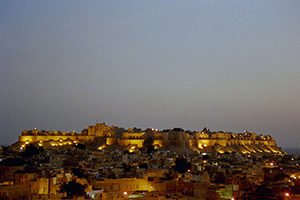 This drive will take us into the heart of the Thar Desert all the way to Pokharan, a fort town renowned for its furniture and interior crafts. Being mid-way, it is a nice place for a brief stop. Our route is dotted by villages of Bishnoiism, a progressive religious movement devoted to eco-friendliness and wildlife protection. After checking in to our hotel, we visit the 15th century Mehrangarh Fort perched majestically on a high hill. Enter through gates which bear the evocative handprints of the Sati queens, women of the royal harem who took their own lives when their men were defeated in battle. The fort has a series of spectacular palaces, each decorated with exquisite engravings, lattice and mirror work. Our final stop is to admire the graceful cenotaph at Jaswant Thada. (Breakfast / Dinner) 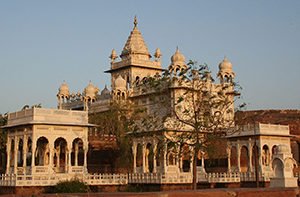 We begin our drive to Udaipur, stopping along the way at Ranakpur to visit the gorgeous 15th-century Jain Temples. The main temple is supported by over 1444 intricately carved marble pillars, none of which is identical to another. Following a lunch stop, we arrive in Udaipur, often called the Venice of India. There is no place in India which appeals more to the imagination of poets and painters, travelers and writers, than this lovely city on Lake Pichola surrounded by hills and mountains. After checking in to our hotel, the evening is free to relax or do some exploration on your own. (All Meals) 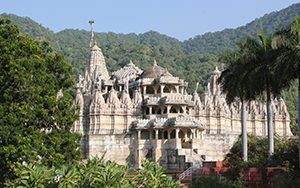 This morning we visit Udaipur City Palace, the largest Palace complex in the area, and the Museum of Rajasthan. Set on a hill overlooking Lake Pichola, this imposing structure is comprised of at least four separate inter-connecting palaces built over a period of nearly three centuries. The palace museum contains a wonderful collection of old Rajput weaponry. We also visit the Crystal Gallery. In the afternoon, stroll the quaint city and take a walk through the colorful Bapu Bazaar. At sunset we take a boat ride on Lake Pichola. This evening we attend Holika Dahan Ceremony at City Palace. A bonfire is lit on the full moon night of Phaguna (one of the 12 months in the Hindu calendar) which, according to Hindu mythology, demonstrates the triumph of divine power over demonic strength. We observe the Holika Dahan ceremony seated in bays at the City Palace. (Breakfast) 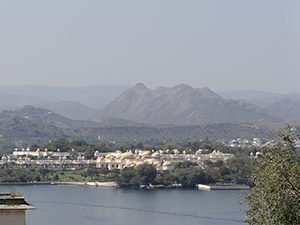 Today enjoy the incredible Holi Festival celebrations with local people. There is great excitement as shops and offices close for the day to allow everyone free time to dance in the streets and toss brightly colored powders at each other. Everyone is having parties and spraying water and dancing under water sprinklers. Women and senior citizens form groups called tolis, moving around together applying colors and exchanging greetings. Singing and dancing to the rhythm of dholak, and savoring mouthwatering Holi delicacies are the other highlights of the day. The afternoon is free, followed by our Farewell Dinner in the evening. (Breakfast / Dinner) 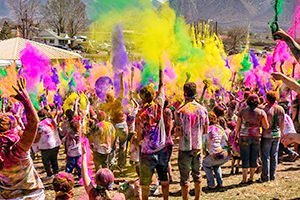 After a morning at leisure, we check out of our hotel and transfer to the Udaipur Airport for our flight to Delhi. We arrive around 3:00 pm, and we have reserved day rooms at an airport hotel which are available for our use until 9pm. Most international flights depart in the late evening or very early morning. After a brief rest and preparations for our homeward journey, we check out and transfer to the airport for our international flights. (Breakfast) 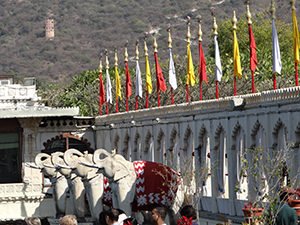 If you have boarded your international flight either late last night or very early this morning, you should arrive back in your home city sometime today. (Meals Aloft) 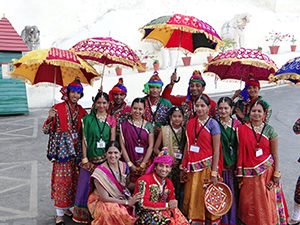