PEARLS OF THE ORIENT

When Spanish conquistadors came to the Philippines in the 16th century, one Spanish captain dubbed the country the “Pearl of the Orient.” Visitors soon learn this honorary title is both literal (the Philippines is a pearl-producing nation) and metaphorical, blessed as it is with abundant natural wonders. The verdant mountainsides, the deep jungles, the white sands beaches, limestone sentinels along the coast and crystal blue seas are all precious jewels to the visitor, and the archipelago numbering 7,000 islands is itself like a necklace wrapping around this portion of the South China Sea.

With so many islands, no one trip can ever possibly hope to encompass everything the nation offers, but this particular tour features some of the absolute best highlights, taking in its rich history, fascinating cultures and natural beauty. An added bonus is the fact that the Philippines is the third largest English-speaking country in the world, dating back to 1898 when the country became the United States’ only overseas colony and later served as allies during World War II. The Philippines is a fascinating destination combining Asian, European, and American influences.

Arrange your international flight to leave your home city sometime today, arriving in Manila, Philippines tomorrow. (Search for flights using the airport code: MNL). If you cannot arrive by late afternoon, we suggest you leave home a day earlier, departing on January 13th and arriving in Manila on January 14th. (Meals Aloft) 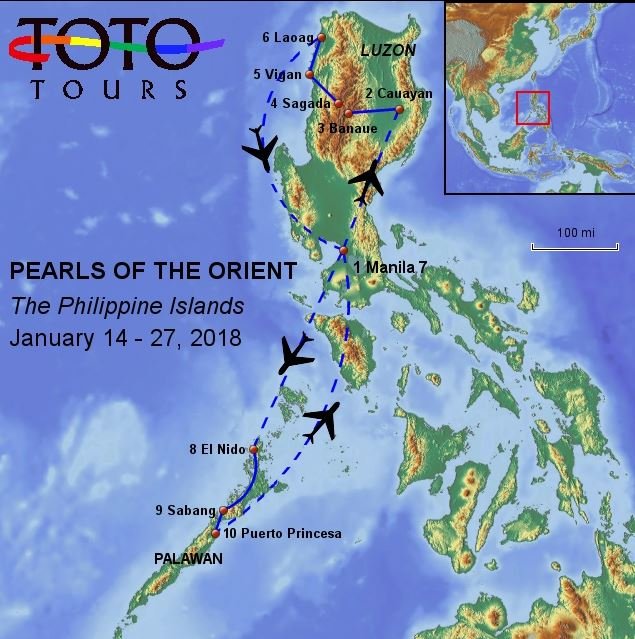 Your flight lands on Luzon, the largest and most populous island in the Philippines. Manila is the country’s largest city and ranks as the world’s most densely populated metropolis with more people per square mile than super cities Kolkata, Mumbai, Dhaka, Paris, Shanghai or Tokyo. The first impression of the city is one of controlled chaos, with the city serving as the country’s center of commerce, banking, tourism, retail, real estate, new media, fashion, theatre and the arts. A driver transfers you from the airport to our centrally located hotel, where the group meets for the first time over cocktail hour followed by our Welcome Dinner in the hotel’s restaurant. (Welcome Dinner included) 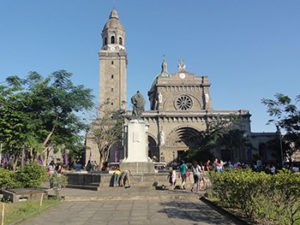 Founded in 1571, Manila is where the Orient meets the Occident, and the colonial era meets the modern age. Intramuros, literally translated as “within the walls,” is a massive stone fortress city complex comprised of European buildings and churches, which were later replicated in different parts of the Philippines archipelago. UNESCO designated this as a World Heritage Site in 1993. On our sightseeing tour, we will also Rizal Park, dedicated to the country’s national hero Jose Rizal, a 58-hectare reserve with lagoon, dancing fountains, both Japanese and Chinese gardens, and the National Museum. (Breakfast / Lunch) 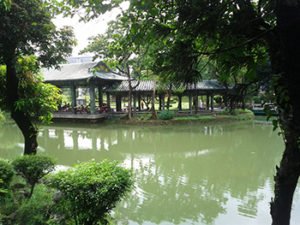 Located 35 miles south of Manila, Taal Volcano is one of the Philippines’ unique natural sites. It is a semi-active volcano surrounded by a lake within the caldera of another prehistoric volcano. Our trek begins on the volcanic island’s shore and ends at the rim of the larger, outside caldera rim. After lunch at a nearby restaurant, we drive to Tagaytay, located on a ridge 2,250 ft. above sea level, to enjoy the breathtaking view down to the Taal Volcano before returning to Manila. (Breakfast / Lunch) 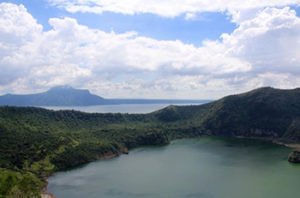 Take a morning flight from Manila to Cauayan in the east-central region of the island of Luzon. We board a motorcoach and make the 4-hour drive through the mountains to the town of Banaue, location of the country’s spectacular rice terraces. Hand-carved out of the mountainside using rudimentary stone tools by the Ifugao people thousands of years ago, these terraces climb to almost 5,000 feet above sea level. In some places, the rice terraces take up entire mountainsides, which the locals proudly call their “heavenly stairs.” After our long scenic drive to get here, the rest of the day is at leisure. Overnight in Banaue. (Breakfast / Lunch)

Ride a local jeepney going to Batad, stopping at a high vantage point to enjoy a unique panoramic view of the rice terraces. Banga-an is a traditional village nestled among the terraces, permitting a closer look into the Ifugao lifestyle, which hasn’t changed much in over 2,000 years. We take lunch at one of the local village inns. In the afternoon, we trek up the Batad Terraces, shaped like an amphitheatre sloping up the steep hillside. We return to Banaue for another overnight stay. (Breakfast / Lunch) 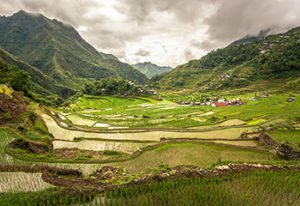 Our drive today takes us from Banaue to Sagada, stopping first at a museum founded by Belgian nuns who have been working in the regions for many decades. The small museum includes artifacts and old photos of the rice-growing families here. We continue our drive to Sagada, where we arrive at mid-day and have lunch at a local restaurant. In the afternoon, explore this quaint town on a walk, passing through a traditional graveyard and walking through Echo Valley. Here coffins of early residents, dating back to ancient times, hang from the sides of the limestone cliffs. Finally, we descend into subterranean caves, also used as ancient burial grounds, before checking in to our hotel for the night. The evening is free. (Breakfast / Lunch) 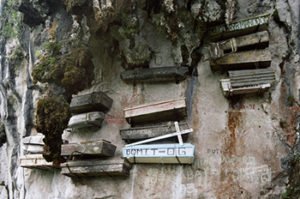 We depart early this morning, driving out of the mountains to the City of Vigan on the west coast of Luzon. Arriving in the early afternoon, we enjoy lunch in a restaurant followed by a city tour. Vigan is a UNESCO World Heritage Site, renowned for the pristine state of its 15th century colonial architecture. Walking along the cobblestone streets, past colorful old stones houses and amidst horse drawn carriages is to feel like having taking a step back in time. We will visit the Conservation Complex, see how they make traditional weaving, and visit the Bantay Church. Overnight in Vigan. (Breakfast / Lunch) 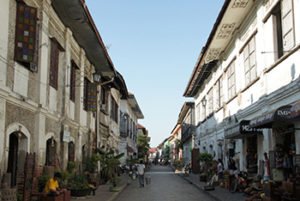 We depart Vigan this morning and drive to Pagudpud, a small, sleepy beach town along the West Philippine Sea. We make a photo stop at Cape Bojeador, which has the highest elevated, still original, and still active lighthouse built during the Spanish occupation. We arrive in Laoag City, where we visit the early 17th century St. Williams Cathedral and its sinking Bell Tower, whose heavy stone weight is making it disappear into the sandy soil. We transfer to the airport in the early evening, for our flight back to Manila and an overnight stay. (Breakfast) 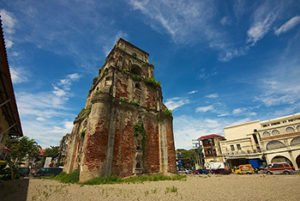 Enjoy breakfast this morning at our hotel, before transferring to the airport for our morning flight to the island of Palawan. Upon arrival, we make the 45-minute drive through rural countryside to Nacpan Beach. We will have time to enjoy this 2½-mile stretch of white sand beach to swim, doing some sunbathing or laze under the shade of a coconut tree. Enjoy a barbecue lunch on the beach. Later on, we trek through the jungle, crossing some streams and climbing paths, to reach Nagkalit-Kalit Falls, where you can swim in the cool crystal clear pool. In late afternoon, we drive to the town of El Nido to check in to our hotel. (Breakfast / Lunch) 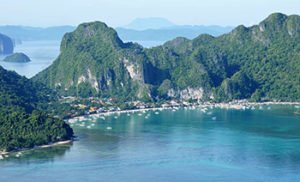 Embark on a full-day excursion doing some island hopping in Bacuit Bay off of El Nido. On Miniloc Island has a Big Lagoon Island with dense tropical jungle that comes right to the shoreline; a small lagoon ringed by limestone formations, which you reach by swimming through a hole in the rock; a Secret Lagoon reached by swimming through a hidden crevice in the rock face. We visit Shimizu Island for barbecue lunch and a chance to snorkel among large schools of brightly colored fish. Finally, we cross back to Palawan and visit 7 Commandos Beach which has a little beach bar, the perfect place for cocktail hour in late afternoon. We return to our hotel in El Nido for a free evening. (Breakfast / Lunch)

Take a half day tour to Cadlao Island and Helicopter Island, both close to El Nido and a great spot for snorkeling or kayaking. After lunch we return to our hotel to check out. We drive south in the island interior, stopping enroute in Taytay Town to see the 17th century Fort San Isabelle. We arrive in Sabang in late afternoon or early evening. Overnight in Sabang. (Breakfast / Lunch) 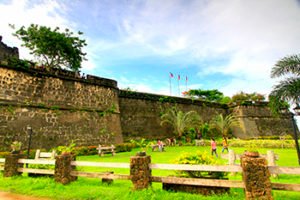 The Puerto Princesa Subterranean River is one of the longest navigable underground waterways in the world, winding its way for 5 miles underneath a mountain range and coming out in the South China Sea. The entire area is a national park encompassing limestone karst formations, intact old-growth forest and distinctive wildlife. The River and its environs became a UNESCO World Heritage Site in 1999. Afterwards, enjoy lunch before taking a paddleboat to explore the nearby mangrove forests. The rest of day is free back at our resort. Tonight, we have our Farewell Dinner at the resorts beachfront restaurant. (All Meals) 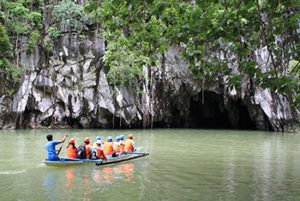 We check out of our resort and transfer to the airport for our return flight to Manila. There are many flights per day from Puerto Princesa. We will offer one group transfer to the airport early in the day for those who have early connections on international flights departing Manila. Our preferred flight from the Puerto Princesa airport arrives in Manila at 4:45pm. If you take this flight, we recommend that you not book any onward international flight departing Manila before 9:00pm. The tour officially ends upon arrival at the Manila Airport. If you wish to extend your stay in Manila, please let us know on your reservation form. (Breakfast) 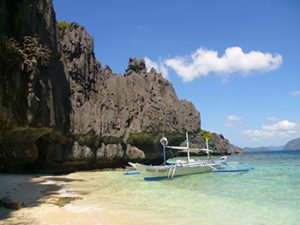