Flying into Sao Paulo, you get a sense of the staggering size of this city of 12 million people — 20 million if you count the suburbs!

The airport is about an hour’s drive away from the heart of the city. The traffic is thick, but it moves along. There is an amazing variety of architectural styles encountered along the way. Getting close to the financial center of town, I see a building reminiscent of the Empire State Building in New York.

Our hotel is a well appointed 4-star with all the comforts of home.

The hotel is just a few steps off of Paulista Avenue, which is Sao Paulo’s equivalent of the Magnificent Mile in Chicago (Michigan Avenue).

There are so many mirrored buildings along this street that you look up and get confused about what you are seeing. It also happens to be very close to the gay district of the city, and the largest Gay Pride Parade takes place on this street every year.

I take a walk to a vegan restaurant for dinner tonight, right in heart of the gay district. There are male couples strolling hand in hand, and kissing in public. One of the craziest sights, however, was a transmission tower on top of one of the tall buildings built to look like the Eiffel Tower! I can’t wait for the tour to begin in order to get a proper introduction to this spectacular city! 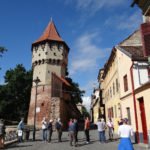 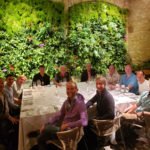