We begin the journey northward toward Romania today with our first stop being at the foot of the Bulgarian Mountains in the town of Kazanlak. Located at the eastern end of the Rose Valley, it is the center of rose oil extraction in Bulgaria and the oil-producing rose of Kazanlak is one of the most widely recognizable national symbols. We’re going to learn more about this production process, but first we make a stop at a UNESCO World Heritage Site – an ancient Thracian tomb.

The tomb shown above is the original tomb – but visitors are not allowed inside to protect the frescoes. Instead, a replica tomb has been constructed nearby – an exact copy – so that people can appreciate the artistry of this ancient civilization, dating back to the 4th century BCE.

One disturbing fact that we learned about the funeral rituals for the Thracian kings is that their wives had to be buried with them. It was considered a great honor, and that they would rule as gods in the afterlife, so the wives willingly submitted to euthanasia. So did the king’s dogs and horses and other beings he wanted to keep with him! It was basically a mass grave.

Our time in Bulgaria has passed too quickly, as this is our final night in this beautiful country. We’ll be back! Tomorrow it is onward to Bucharest, Romania! 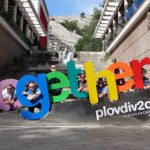 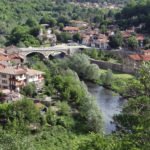