The day dawns clear and cool. We meet local guide Yurdana for a tour of the highlights of this beautiful city. We begin with a drive to the foothills of the mountains to visit the National History Museum.

One of the first exhibits we visit features the treasures from a Necropolis discovered by accident in 1972 at the Black Sea town of Varna. Unearthed were what are considered the most ancient examples of gold ornamentation in the world, dating from 4,600 to 4,200 BC. The culture had sophisticated religious beliefs about afterlife and the site offers the oldest known burial evidence of an elite male (the end of the fifth millennium BC is the time that the transition to male dominance began in Europe). The high status male buried with the most remarkable amount of gold held a war adze or mace and wore a gold penis sheath.

This hall contained the most incredibly ornate and detailed objects from the Varna culture and also some Thracian Tombs.

We drive to the nearby Boyana Church, a UNESCO World Heritage Site since 1979. It is a tiny church built in 3 stages starting in the late 10th Century, with an addition in the mid-13th Century and another in the 19th Century. Visitors are tightly controlled, with only 8 allowed inside at one time for a maximum of 10 minutes. Of course no photos are allowed inside, and the frescoes are what make this place so extraordinary – being painted in a realistic style. You can see a few examples on the Wiki page:
https://en.wikipedia.org/wiki/Boyana_Church

Returning to the city we commence a walking tour of the central district, exiting the bus at the site of the excavation of the ancient Roman city of Serdica. The only functioning Mosque in Sofia is in the background. 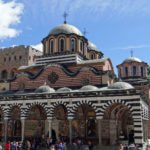