In the heart of historic Palermo stands a square featuring a fountain surrounded by sixteen nude statues of nymphs, humans, mermaids and satyrs. Because the nudity was in plains sight of a nunnery and other religious institutions, the place became known as the “Square of Shame” (Piazza della vergogna). We felt no shame whatsoever in clambering around and photographing body parts, and even posing for our first group photo in the Square of Shame!

We have a long walk through the old city, and are particularly impressed by the Opera House of Palermo.

At the intersection of two major streets in old Palermo is the Quattro Canti, or Four Corners Square, officially known as Piazza Vigliena. The piazza is octagonal, four sides being the streets; the remaining four sides are Baroque buildings with nearly-identical facades containing fountains with statues of the four seasons, the four Spanish kings of Sicily, and of the patronesses of Palermo. The facades rise four floors; the fountains rise to the height of the second floor, the third and fourth floors contain the statues in niches. At the time the piazza was built, it was one of the first major examples of town planning in Europe.

Today is a national holiday celebrating the end of World War II, and the city is also being visited by an important member of the cabinet of Giuseppe Conte. Security is high, and the Cathedral of Monreale (which was on our itinerary) is closed for his first visit there. We make a “Plan B” and race to the old Norman Castle to visit the famous Palatine Chapel — the Royal Chapel for the Norman Kings of Sicily. It too is closed for security! “Plan C” is to invite the group for a previously not-included lunch and a drink, followed by a visit to the Cathedral of Palermo which is outstanding!

We return to the hotel for a free evening. Several of us gather for dinner at a wonderful restaurant nearby called Bioesseri, where everything is organic. They have several vegan options too! 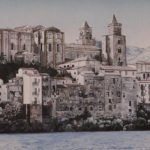 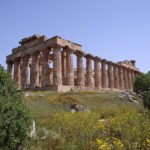 Splendors of Sicily – Temples of Selinunte and Agrigento